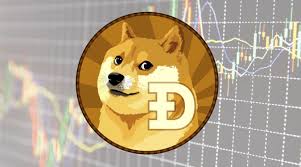 Dogecoin (DOGE, symbol: Ð  and  D ) is a Litecoin-derived cryptocurrency featuring a Shiba Inu from the Internet Doge Internet meme.

Dogecoin was developed in 2013 by Billy Markus and Jackson Palmer and has been said to be the “funnest” of all cryptocurrencies. This is due, in part, to doge, a dog-like Shiba Inu meme, as its mascot. Dogecoin is a digital currency. It is an entirely decentralized cryptocurrency. Dogecoin runs on it own P2P network. It functions on it own blockchain. Dogecoin allows you to send money over the internet. In 2014, Dogecoin became one of the top cryptocurrencies in the world.

The users themselves call it “joky”. One of the most popular uses of the coin is rewarding internet users for interesting and quality content created or shared by them. It was introduced on December 8, 2013.

Compared to other cryptocurrencies, Dogecoin has a fast coin production schedule: around 100 billion coins will be in circulation by the end of 2014, with an additional 5.2 billion coins every year thereafter.

Although there are currently few commercial applications for the coin, the currency is gaining traction as an internet tipping system, where social media users tip Dogecoin to provide interesting or newsworthy content. .

Many community members, as well as members of other cryptocurrency communities, use the phrase “To the moon!”. to describe the general feeling of the increasing value of the coin.

Mining differs from Litecoin in several parameters. A new block in the Dogechain is created in 1 minute, unlike 2.5 minutes for Litecoin. Today, the complexity of mining is rolled over once per block and the reward for miners is fixed. However, from the start, the complexity was changed once every four hours and the reward was a random number between 0 and the maximum determined by the block settings.

Over time, the approach to issuing coins has also changed. First they wanted to limit it to 100 billion tokens, but then the issuance of new coins became unrestricted.

Dogecoin was created by programmer Billy Markus of Portland, Oregon, who hoped to create a fun cryptocurrency that could reach more people than bitcoin. Also, he wanted to distance himself from the controversial history of other coins, mainly bitcoins. At the same time, Jackson Palmer, a member of the marketing department at Adobe Systems in Sydney, Australia, was encouraged on Twitter by a Front Range Community College student to make the idea a reality.

After receiving several mentions on Twitter, Palmer purchased the dogecoin.com domain and added a splash screen, featuring the coin’s logo and scattered Comic Sans text. Markus saw the site linked to an IRC discussion forum and began efforts to create the currency after contacting Palmer. Markus based Dogecoin on the existing cryptocurrency, Luckycoin, which features a random reward received for mining a block, although this behavior was later changed to a static block reward in March 2014. In turn, Luckycoin is based on Litecoin, which also uses Scrypt technology in its proof-of-work algorithm. The use of scrypt means that miners cannot use SHA-256 bitcoin mining equipment, and creating FPGAs and ASIC devices dedicated to mining is complicated. Dogecoin was officially launched on December 6, 2013. The Dogecoin network was initially expected to produce 100 billion tokens, but it was later announced that the Dogecoin network would produce an infinite number of tokens.

On December 19, 2013, Dogecoin jumped almost 300% in 72 hours from $0.00026 to $0.00095, with a volume of billions of coins per day. This growth came at a time when bitcoin and many other cryptocurrencies were reeling from China’s decision to ban Chinese banks from investing Chinese yuan in the bitcoin economy. Three days later, Dogecoin experienced its first major crash dropping 80% as large mining pools seized the opportunity to tap into the very low computing power needed at the time to mine the coin.

On December 24, 2013, the Reserve Bank of India warned users of Dogecoin and other cryptocurrencies about the risks associated with them. On December 25, 2013, the coin’s first major theft attempt occurred when millions of coins were stolen during an attempt to hack online cryptocurrency wallet platform Dogewallet. The hacker gained access to the platform’s file system and modified its send/receive page to send all coins to a static address. This incident prompted tweets about the piece, making it the most mentioned altcoin on Twitter. To help those who lost funds on Dogewallet after its breach, the Dogecoin community has launched an initiative called “SaveDogemas” to help give coins to those who have lost them. About a month later, enough money was donated to cover all the lost coins. In January 2014, the coin’s trading volume briefly surpassed that of bitcoin and all other cryptocurrencies, Dogecoin boasts a market capitalization of USD 13.5 million. April 2015 Jackson Palmer announced he was taking an “extended leave” from the cryptocurrency community.

The implementation of Dogecoin differs from Litecoin in several parameters. Dogecoin has a talk time of one minute, unlike Litecoin’s 2.5 minutes. The difficulty retargeting time is once per block and the reward is set according to the block schedule shown below. However, when Dogecoin was first introduced, the retargeting difficulty was once every four hours and the reward was a random number between 0 and a maximum set by the block schedule. In the system in which a random number of coins were distributed, the rewards were calculated using a pseudo-random number generator from Mersenne Twister.

On March 12, 2014, version 1.6 of the Dogecoin client was announced. In addition to allowing a fixed reward per block, the new client update also introduced a new difficulty algorithm called DigiShield. The new difficulty algorithm, adopted by DigiByte, was primarily aimed at preventing multi-tools from being able to mine (and therefore profit from) the coin, by drastically reducing the price of the coin, while forcing the miners to a piece to deal with the problem. increase in difficulty the pools left in their wake. Thanks to the almost instantaneous change in the difficulty of the algorithm, any multipool entering the Dogecoin network will leave immediately, because the difficulty of mining will increase sharply, leading to a drop in profitability and, ultimately,

Several cases of using an employer’s or university’s computer to mine Dogecoin have been discovered.

Where to buy DOGE – Dogecoin Exchanges?

Several online exchanges offer DOGE/BTC and DOGE/LTC trading. Three exchanges, Mengmengbi, Bter, and BTC38, offer DOGE/CNY trading. On January 8, 2014, AltQuick.co was the first exchange to launch the DOGE/USD exchange. On January 30, 2014, the Canadian exchange Vault of Satoshi also announced the trading of DOGE/USD and DOGE/CAD trades. In February 2014, the Hong Kong-based exchange Asia Nexgen announced that it would support the trading of Dogecoins in all major currencies. China’s BTC38 exchange also added support to the Dogecoin exchange, bolstering the 24-hour market capitalization. On the first day of trading, Dogecoin was the second most traded currency on the platform, after BTC.

Trading of physical and tangible items in exchange for DOGE takes place on online communities such as Reddit and Twitter, where users frequently share currency-related information. On December 23, 2013, Tristan Winters of the online journal Bitcoin Magazine explained what was needed for Dogecoin to replace bitcoin.

The first Dogecoin ATM was demonstrated at Coinfest in Vancouver in February 2014. Two Bitcoin ATMs supporting this coin and other altcoins opened in Tijuana, Mexico on March 17, 2014.

The coin has also been used in an attempt to sell a house and has been used in the pornography and poker industries.

Dogetipbot was a cryptocurrency transaction service used on popular sites such as Reddit and Twitch.tv. It allowed users to send Dogecoins to other users via commands through Reddit comments; support for Twitch.tv and Twitter had been discontinued earlier. The service was launched in 2013 on Reddit. The “dogetipbot” trademark was officially registered on August 19, 2014. In November 2014, the dogetipbot developer team raised $445,000 in venture capital funds. In May 2017, Dogetipbot was shut down and taken offline after its creator declared bankruptcy. this left many Dogetipbot users losing their coins stored in the Dogetipbot system.

Over the years, many failover services have been created.

Dogecoin wallets come in a variety of forms designed for different types of devices. There are five main types: a portfolio of startup programs on a computer, a mobile version, a web application, a paper medium and a portable device. Here is a list of wallets with a user-friendly interface and safe storage of Doge:

MultiDoge – Dogecoin wallet program, imported with MultiBit Bitcoin client. This is a lite version of the wallet. So just “synchronize” it via a chain of channels before activating it. This instance performs the synchronization process very quickly. But the wallet should only be for normal use. There are versions for operating systems (Windows, Mac OS X, Linux).
Wowdoge – this is the Lite version of Software Defined Storage for Doge coins, with a little synchronization in the blockchain. It is functional, has a clear graphical interface and is easy to use. There are versions for operating systems (Windows, OS X, Linux) and Github source code.
Dogecoin Core is the full official version of the Doge Wallet. The initial synchronization with the blockchain is slow compared to lite versions and the installation of the program requires a lot of free space on the PC. There are versions for operating systems (Windows, OS X, Linux, Android, Blackberry, Browser, Source, IOS).
DogeChain is a free online version of the Dogecoin wallet. On the website, you can register and get the logicon address. Without installation or long synchronization with the channel chain, you can start using it.
You can also use hard wallets such as Ledger and Trezor, as well as the Coinomi mobile multi-currency wallet.

People can buy the coin in both cryptocurrency and fiat currency. The token is listed on the following exchanges:

The Dogecoin community and foundation encouraged fundraising for charities and other notable causes. On January 19, 2014, the community created a fundraiser to raise $50,000 for the Jamaican bobsled team, which had qualified for the Sochi Winter Olympics but could not afford to Getting There. On the second day, $36,000 worth of Dogecoin was donated and the Doge to Bitcoin exchange rate increased by 50%. The Dogecoin community also raised funds for a second Sochi athlete, Shiva Keshavan.

Inspired by fundraising from the Winter Olympics and smaller successes, the Dogecoin Foundation, led by Eric Nakagawa, has begun collecting donations for the construction of a well in Kenya’s Tana River Basin , in cooperation with Charity: Water. They decided to collect a total of 40,000,000 Dogecoin (USD 30,000 at the time) before World Water Day (March 22). The campaign was successful, garnering donations from over 4,000 donors, including an anonymous benefactor who donated 14,000,000 Dogecoin (about $11,000).

Unlike deflationary cryptocurrencies (like Bitcoin), the number of Dogecoins that can be produced is unlimited. This puts Dogecoin in the same category as other inflationary coins. According to the current production schedule, approximately 98 billion coins were released in February 2015, of which 600,000 in block were mined on February 25. Thereafter, approximately 5.256 billion additional coins will be produced each year, in perpetuity. This represents an inflation rate of 5.256% (in 2015), which will decrease over time due to the introduction of new coins into the economy (eg in 2025).